The Mystery of Tea unveiled: WHAT IS TEA?

A luminous-colored liquid. A pleasing aroma for the senses and the palate. A delicious and fragrant ‘Hot & Cold’ drink. But what’s really behind this beverage which has managed to retain – and indeed increase – its popularity over millennia?

Click Here for a Printer Friendly version of this Page in PDF format! 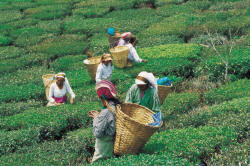 The tea plant (camellia sinensis) is a species of tree related to the camellia. Its flowers are yellowy-white and its fruits small and hard-shelled, similar to a hazelnut. The evergreen leaves are leathery, dark and slightly serrated. Given minimum annual temperatures of 18° C, moderate and infrequent frosts, a uniform annual precipitation of 1600 l and a good balance of sunshine, a tea plant can easily grow to become 100 years old. Wild tea plants are indeed reputed to reach an age of up to 1,700 years.

Two original tea plants are known today: Thea sinensis (or Chinese tea): A shrub-like plant which reaches a maximum height of 3-4 m and can even survive frosts. Thea assamica (or Assam tea): A substantial tree reaching a height of 15-20 m which grows exclusively in the tropics. The constant crossing of these two original plants forms the basis of all the tea cultures in the world today.

The cheapest drink worldwide after water is one of the most valuable in terms of its chemical composition: approx. 32 % of its ingredients pass into the infusion. 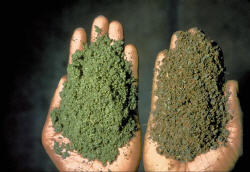 “Tea both stimulates and calms”: Tea owes its stimulatory effect to its caffeine (teine) content: It does not act on the circulation via the heart, however, but directly on the brain and central nervous system, as it is bonded to the tannins and is not released until it reaches the intestine. This explains the demonstrable capacity of tea to increase concentration and responsiveness. Cultivation: Tea is propagated by taking cuttings from parent plants. The tea plant is kept in the vegetative phase by regular pruning to prevent flowering and fruit formation. This also makes it easier for the tea pickers to gather the 2 uppermost leaves and the newest bud (only these are relevant for the tea harvest). Most picking is still done by hand in order to preserve the quality of the harvest. Some countries have developed mechanical picking methods, however, which greatly simplify production processes.

Tea is cultivated in large plantations/estates such as those of the Indian district of Darjeeling, e.g. on the 2,000m high slopes of the Himalayas. Much lower lying is the Assam region of Northern India, the biggest continuous tea cultivation area of the world, situated on either side of the Brahmaputra.

On the island of Sri Lanka (formerly Ceylon), a bitter, aromatic tea is produced in the three cultivation areas of Dimbula, Nuwara Eliya and Uva which has become famous throughout the world. The Chinese produce a distinctly smoky, mild tea in various provinces such as Yunnan and Zhejiang. The Chinese are known for their tea specialties, such as tea bricks or tea roses. Japan produces exclusively green tea, most of which is consumed by the Japanese themselves. Other tea-producing countries are Africa, Indonesia, Taiwan and Argentina as well as Thailand, Russia and Turkey, though these are relatively insignificant in terms of production volume. See also statistics.

The Production Of Green Tea: 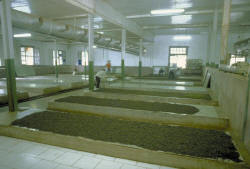 Green tea comes from the same plant as black tea, but the fermentation process is prevented by heat treatment immediately after withering.

Withering: This process is only carried out where necessary. The necessity and duration of withering varies widely according to the desired type of tea.

Steaming / dry heat treatment: This destroys the plant’s own enzymes so that the leaf will retain its green color instead of turning “black”.

Rolling: Rolling is performed manually or by machine depending on the type of tea. In some cases the leaf is rolled into artistic shapes following a tradition which dates back thousands of years.

Drying: For this purpose, the leaves are either stacked in hot-air rack driers or exposed to the natural heat of the sun.

Sorting: Green tea is available in the same familiar grades – leaf, broken, Fannings or dust – as black tea, depending on the production specification. Green tea is a strongly alkaline drink which protects the body from hyperacidity. It contains numerous tannins, minerals and vitamins.

Oolong is a semi-fermented tea. Its secret lies in the fermentation of the leaf’s outer edges, while the heart of the leaf remains unfermented.  It is mainly grown in Taiwan and China.

White teas originate mainly from the mountainous regions of Fujian in Southern China. The leaves are slowly, gently steamed in the open air and extremely careful handled. This tea is gaining more and more converts. Only the bud (Silver Needle) and two most upper leaves are plucked. Very low in tannin and teine. 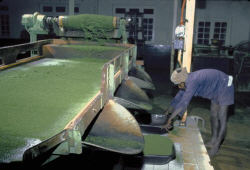 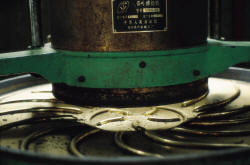 CTC stands for crushing, tearing and curling. Both the CTC and LTP methods are mainly used for the finer end of the scale, i.e. fanning and dust grades. These teas are usually destined for teabag production. The wither ed leaf is often cut to a uniform size by machine. Then the leaves are fed into the CTC machine where they are crushed, torn and curled in a single operation by metal rollers. The extracted cell sap is collected and added to the leaves again. The crushed leaves are then fermented, dried and sorted.The CTC method is mainly used in Indian regions.

The third method of producing black tea is the LTP method, named after the inventor of the relevant machine, the Lawrie Tea Processor. In this method, the withered leaves are often leveled before being processed in the LTP machine. Here they are virtually torn to pieces by blades rotating at high speed. This is followed by the usual fermentation, drying and sorting procedures.

The leaf grades result exclusively from the last stage of production, the sorting stage. There are 4 basic groups in orthodox production: Leaf, Broken, Fannings and Dust. These categories specify and indicate the different leaf sizes and associated strengths.